describes heavy snowfall in the lee (downwind) of large bodies of water, such as the Great Lakes in North America. When an airstream of Polar or Arctic air, an air-mass called continental polar air (cP), crosses relatively warm water it will pick up heat and moisture from the water surface. Meteorologists say the air becomes 'unstable' or is 'destabilized'.

When unstable air is moved onto rugged surfaces, as shores and hills, it will eventually rise leading to cloud formation and precipitation. Lake-effect clouds appear as bands of cloud over the water and shoreline on satellite imagery. Although the clouds are relatively shallow (up to a thickness of maybe 4 km), they produce significant precipitation on the further shore. The Lake-effect typically produces extremely heavy snowstorms and blizzards in Chicago or New York for example.

However, the North Sea and polar continental air from Scandinavia might produce a very similar effect along the North Sea coast of the United Kingdom. For example, on January 10-20, 1987 very cold polar continental air produced extremely cold temperatures of -5C (23F) and exceptionally heavy snowfall around the Thames Estuary and East Anglia. Leigh-on-Sea reported 44cm (17in) of level snow following intense convection over the relatively warm North Sea. As the cold air moved inland convection and snowfall declined rapidly - very typical for a Lake-effect scenario. Therefore the Lake-effect is also known as Bay-effect or Ocean-effect and is also known in areas affected by the Gulf Stream , or around the Sea of Japan 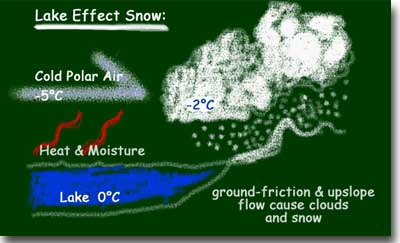 As the water-body need to be relatively warm Lake-effect snow typically occurs in the autumn or early winter. A frozen lake doesn't preclude a significant lake-effect. Lake-effect snow is extrelemy difficult to forecast. However, the 850hPa map and the current water temperatures are of greatest importance for forecasters then.