Cirrostratus (Cs) - the name is a composite of the Latin cirrus = wisp or curl and stratus = layer. Cirrostratus is a member of the ten fundamental cloud types (or cloud genera). Cirrostratus are high-level clouds, appearing as a thin hazy, uniform and featureless whitish and smooth veil. Cirrostratus are darker than cirrus and are always thin enough for the high Sun to cast shadows. Sometimes a fibrous and banded aspect may appear, but the intervals between the bands are filled with thinner cloud veil. Cs are covering part or all part of the sky and often produce halo phenomena, either partial or complete. They form at altitudes between about 5 and 10km (about 16,600 and 30,000ft). 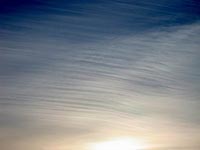 The edge of a veil of cirrostratus may be straight and clear-cut, but more often it is irregular and fringed with cirrus. Some of the ice crystals that compose the cloud are large enough to fall and thereby produce a fibrous aspect. Cirrostratus occasionally may be so thin and transparent as to render it nearly indiscernible, especially through haze or at night. At such times, the existence of a halo or mock suns (sun dogs) may be the only revealing, but striking features. These optical phenomena are most marked when the cirrostratus is thin and gradually disappear as it thickens.

Cirrocumulus indicate a significant amount of moisture and warm air that is advancing or has moved in at higher levels colder than freezing. Covering much of the sky there are often accompanying other cloud types, such as cirrus, cirrocumulus and clouds from other levels. Cirrostratus may form by the merging of elements of cirrus, from ice crystals falling from clouds, from the thinning of altostratus, or by spreading out of the cirrus plumes from the anvil of cumulonimbus clouds. Since cirrostratus and altostratus form from each other, it is frequently difficult to delineate between the two. In general, altostratus does not cause halo phenomena, is thicker than cirrostratus, appears to move more rapidly, and has a more even optical thickness. Towards the horizon, however, the differences may be difficult to detect. When near the horizon, cirrostratus may be impossible to distinguish from cirrus.

Common types and varieties of cirrostratus
Cs nebulosus as a thin featureless and uniform cloud veil producing halos; Cs fibratus fibrous and patchy fringeing with cirrus cloud sometimes; Cs undulatus in wave like fine ripples and Cc duplicatus with more than one layer.

What do cirrostratus clouds tell about the weather?
Just like cirrus and cirrocumulus, cirrostratus does not produce rain, but together with decreasing pressure, it is a rather reliable sign for a weather deterioration. Cs nebulosus is heralding an approaching warm front of a depression and thus rain within the next eight to 24 hours, especially when it shows increasing thickness and the occurrence of the lower clouds. However, cirrostratus may be seen coming from the west, without any deterioration in weather conditions, which usually indicates a disturbance passing much farther north.